Later on, in the reign of Humayun, the inner enclosure was built and a marble tombstone was also placed over the grave.  Some additions were again made in the reign of Akbar.

The present tomb was built during the reign of Emperor Jahangir in 1605 AD (1014 Hijri) by Khwaja Imaduddinn Hassan.The fact is well supported and authenticated by the inscriptions with date and the name of its founder engraved on the walls inside the tomb. 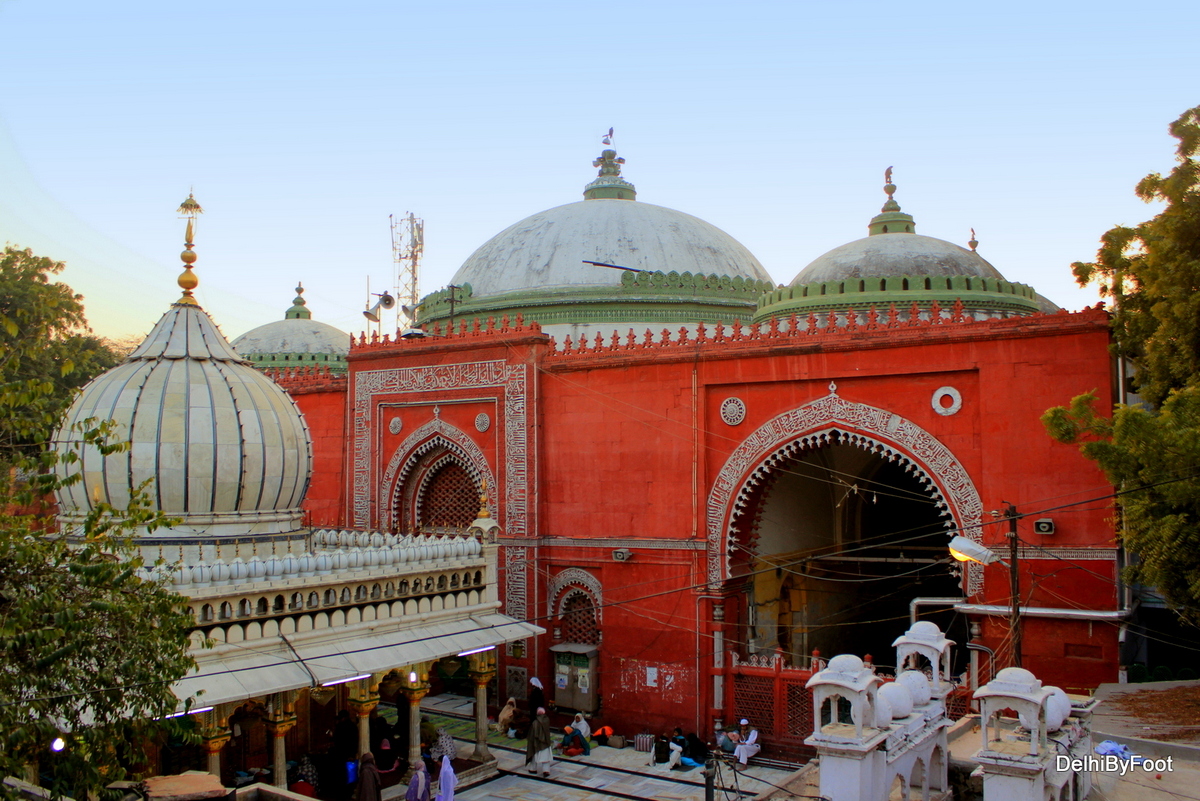 The mosque is also known as Khizri mosque.  The common belief is that this was built by Khizr Khan, the son of Alauddin Khilji and also a disciple of Hazrat Nizamuddin Aulia.

It must be noted that it was the central dome which was constructed by Prince Khizr Khan and the other two sides were added to it later by Firozshah tughlaq.

This mosque is constructed of red sandstone and contains three compartments which are inter connected.  The arches of the mosque are beautifully ornamented with Quranic inscreiptions.  Daily five time prayers is held here.  Rencentely Aga Khan Foundation has started its conservation work at this mosque.

Adjacent to the tomb of Jahanara, towards the east is that of Emperor Mohammad Shah better known as Mohd Shah Rangila.  His real name was Roshan Akhtar and he was the grandson of Bahadurshah I. The greatest event in his period was the invasion of by Nadir Shah in 1739 AD and the massacre of which is still remembered as the greatest calamity that had ever befallen the city. The other graves inside the enclosure are of his wife Sahiba Mahal and his grandsons Mirza Jigru and Mirza Ashuri.

The first object of interest while entering the Dargah from the eastern gate (Baoli Gate) is Baoli or water reservoir. It was built by the Saint himself under the supervision of Hazrat Nasiruddin Chiragh Dehlavi who was the Khalifa of the saint. It’s measurement is 123” by 53” internally and it is enclosed by stone walls on the three sides ie east, west and south. On the north of the Baoli are descending steps which go to its depth into the well. At present there are about 20 steps above the water level.

When the construction work of the Baoli was started, Sultan Ghayasuddin Tughlaq also started his own construction simultaneously in Tughlakabad and employed all the labor there in order to obstruct the Baoli work of Hazrat Nizamuddin Aulia.  As the laborers had great respect and devotion for the saint, they decided to work for the Baoli during night.  When the Sultan came to know this he issued fresh orders to stop the supply of oil for the Baoli work which was needed for lightening arrangements.  The Saint than directed Hazrat Nasiruddin to use the water from the Baoli as oil and the water did burn like real oil and the Baoli work was completed in wonder.  That was the time when Hazrat Nasiruddin got the tiltle of Roshan Chiragh Delhi (Lamp of Delhi). At present there is a big locality of this name in i.e Chiragh Delhi.,

(History of the Tomb)

The tomb of Hazrat Nizamuddin Aulia measuring about 32’ square externally is situated in the centre of the enclosure of the Dargah.  It includes the verandah measuring 6’8” in width and having five arched openings on each side with twenty marble pillars.

The present structure of the tomb which we see today is the result of many additions in different times.  When Hazrat Nizamuddin Aulia was buried, there existed nothing except the Jamatkhana Mosque, which was built during the lifetime of the saint.  It was Mohd. Shah Tughlaq who first erected a cupola over his grave.  It was ornamented by his successor Firozshah who made the arches of the dome.  It was rebuilt during the reign of Emperor Akbar.  In 970 Hijri (1526AD) the marble slab was engraved at the head of the grave by Syed Faridun Khan.

The Wooden Canopy (Chaparkhat) was raised over the grave by Nawab Farid Khan during the reign of Emperor Jahangair in 1017 Hijri (1608 AD).

Beesdari or the Verandah was built by Khalilullah Khan who was the governor of during the reign of Shahjahan in 1063 Hijri (1652 AD).  But at that time the pillars of the Verandah were of red sandstone.  Later on Hazrat Kale Sahib, grandson of Hazrat Maulana Fakhar Pak bought the marble pillars to replace the red sandstone pillars but he died and then the pillars were replaced by Nawab Ahmed Bakhsh Khan of Firozpur Jhirka in 1808 AD.  In 1822 AD Khursheed Jah of erected a marble Jaali around the grave.

Recently the golden work has been carried on at the tomb of Hazrat Nizamuddin Aulia.

It is situated towads the south of Hazrat Nizamuddin Aulia’s holy grave and adjacent to the south wing of Jamat Khana mosque.  It is a marble enclosure open to the sky.

Jahanara, the daughter of emperor Shahjahan and older sister of Aurangzeb was a great devotee of Hazrat Nizamuddin Aulia and Hazat Moinuddin Chishti. She also wrote a biography of Khwaja Moinuddin Chishti, titled “Munis ul Arwah’. She was a highly educated lady and here favorite study was Sufism. She was given the titles of ‘Badshah Begum’ (Lady Empress) and Begum Sahib (Princess of Princesses).

The following inscriptions are written at the marble headstone of Jahanara’s grave which are said to have written by the Princess herself.:

He is living and everlasting

Let no one cover my grave except with greenery,

for this grass suffices as a tomb cover for this poor.

The humble and mortal Jahanara disciple of Lords of Chisti,

Daughter of Shahjahan the warrior.( May God illuminate his demonstrations).

To the east of Jahanara’s grave is that of Mirza Nili, son of Shah Alam II and Jamalunnisa Begum, daughter of Akbar II is buried to the west of the Princess.

The Urs Mahal was constructed by His Holiness Hzt. Pir Zamin Nizami Syed Bokhari, Late Sajjadanashin of Dargah Hzt. Nizamuddin Aulia under his own supervision and with the help of Pandit Jawahar Lal Nehru, the first Prime Minister of India and Bakshi Ghulam Mohammad as they had great respect of the Holy Saint.  It was inaugurated by Dr. Radha Krishnan (Former President of ) in the presence of Pandit Jawahar Lal Nehru in 1962.  Before the construction of the Urs Mahal the Urs was celebrated at the same place under the tents and shamianas.